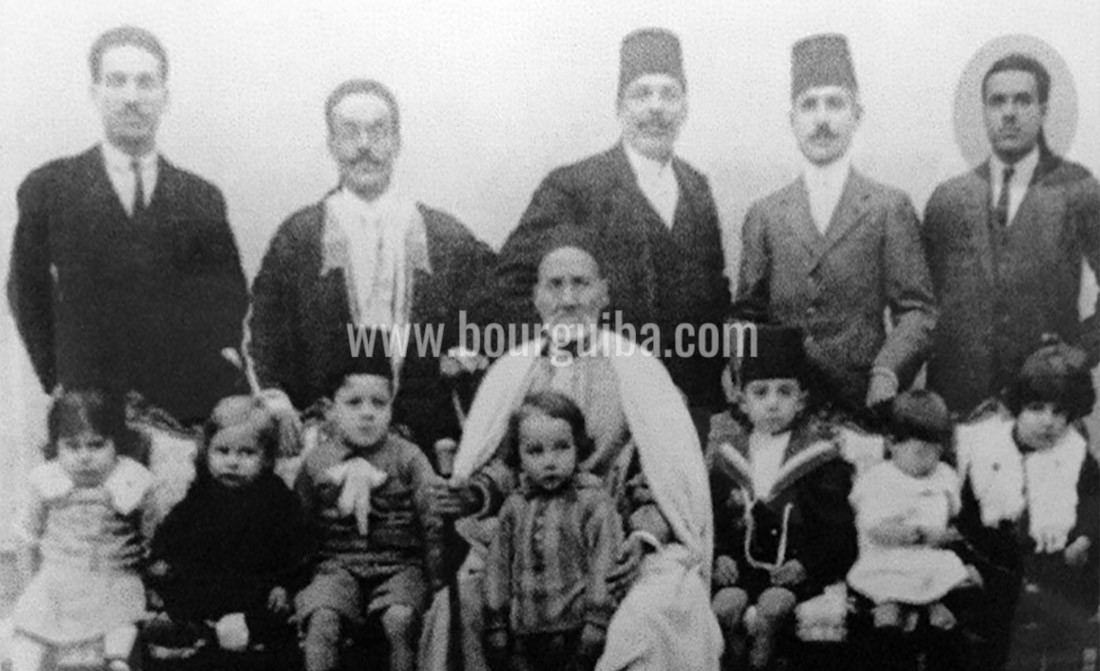 Officially born on August 3rd, 1903 in Monastir, son of an officer of the Beylical army, he was the youngest of eight brothers and sisters. His family belonged to the middle class of the Tunisian Sahel.

Sent to Tunis at the age of five where he joined his older brother, Bourguiba attends the primary and secondary school at “Sadiki” college, and then at Carnot High School where he graduated. He then flew to Paris to “study law to fight the French protectorate.”

Habib Bourguiba returned to Tunisia in 1927 with a diploma allowing him to work as a lawyer. He immediately embarked on a political journey by joining the ranks of the Destourian Party (a nationalist party that advocates the return to a traditional Tunisia) and by collaborating with the Tunisian newspaper “L’étendard”, before founding “L’action Tunisienne” in 1932.

This charismatic leader quickly realized that the emancipation of his country could not be the work of a political class that is stuck in the heart of Tunis and is suspicious of the popular masses.

In 1934, he resigns from Sheikh Abdelaziz Thaalbi’s “Vieux Destour” and creates, with a group of young people, the “Neo-Destour” party.

After only a few months of political actions led by Bourguiba and his companions, along with a direct contact with the crowds, The French general resident, Marcel Peyrouton arrested the “rebels” and ordered their deportation to the south of Tunisia. The detention lasted until 1936.

He was arrested again on April 10, 1938 where he was detained in the Civilian Prison of Tunis and then in the penitentiary of Teboursouk.

Bourguiba and his mates transferred, on board of a destroyerto the fort of Saint-Nicolas in Marseille on May 26, 1940. They transferred again to Lyon and imprisoned in Montluc prison on 18 November 1942 then in Fort de Vancia.

The Germans release Bourguiba on December 1st, 1942, but he refused to side with the Axis Powers. “Germany will not win the war, and cannot win it.” He wrote before leaving prison in a letter to his fellow comrade, Habib Thameur. “The order is given, to you and to the activists, to make contact with Gaullist French to combine our clandestine action. Our support must be unconditional. It is a matter of life and death for Tunisia”. 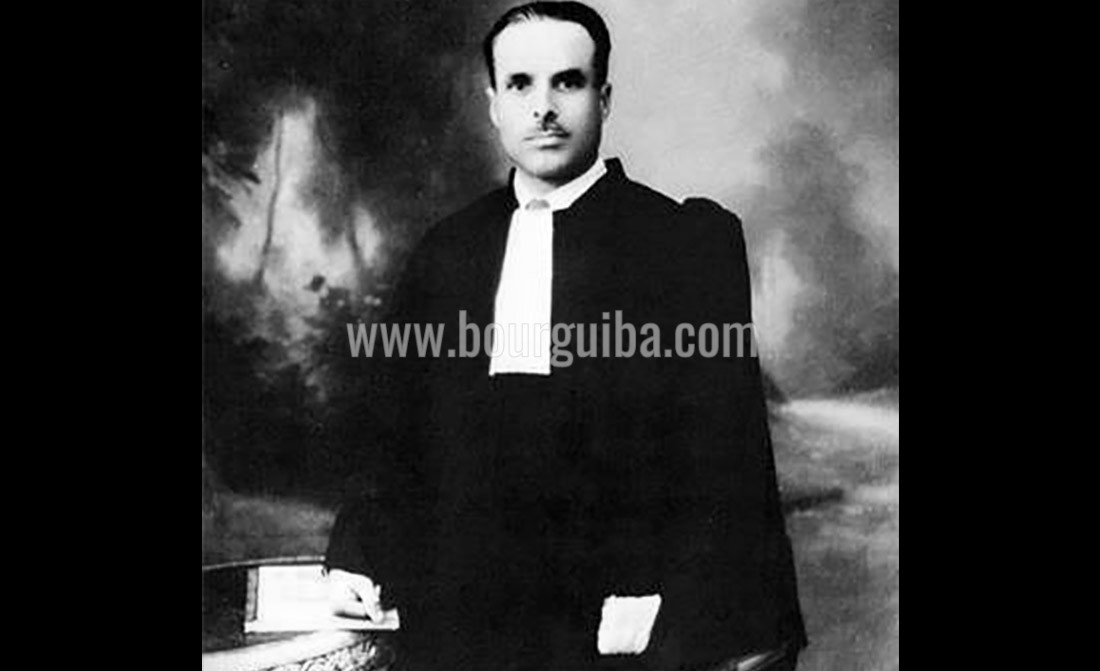 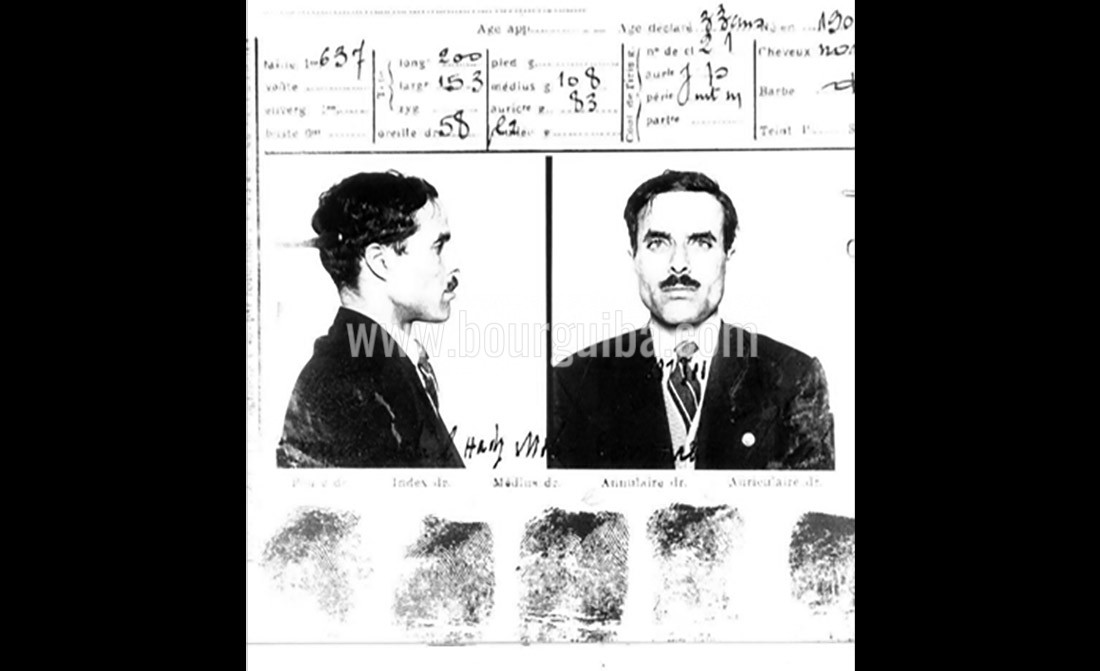 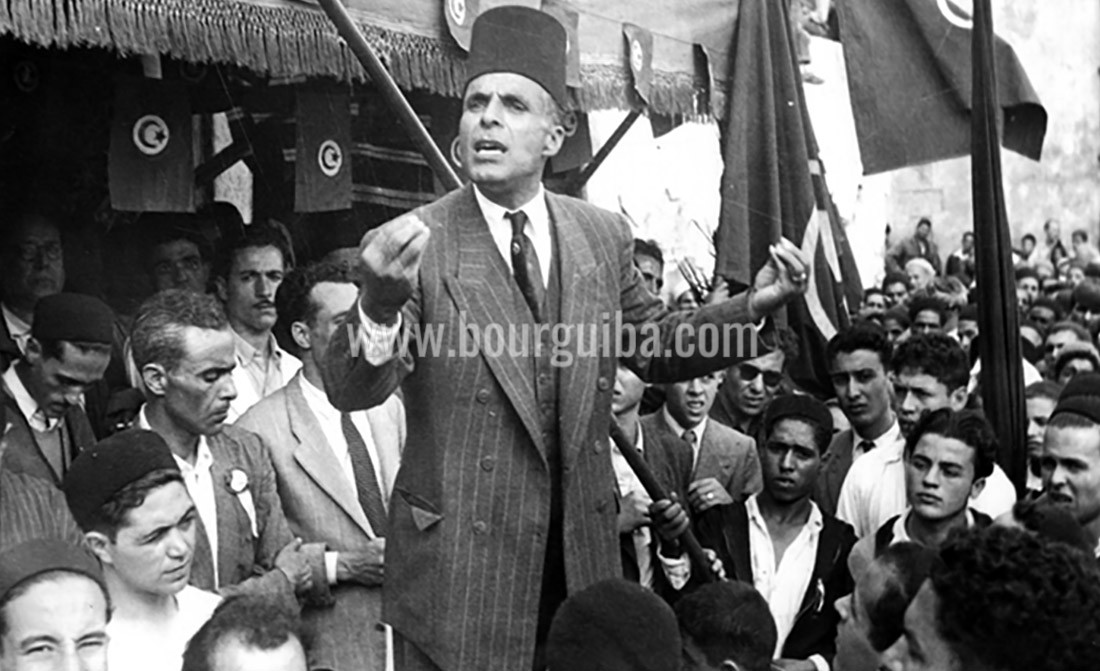 The support provided by the Neo-Destour to the French Resistance, is not taken into account by the colonial authorities, after the defeat of the Axis Powers. Moncef Bey, the most popular ruler of the Husseinite dynasty is dethroned, while Bourguiba flees to Egypt by crossing the Libyan borders, disguised as a caravan. He settles in Cairo from 1945 to 1949 where he met Arab nationalists and intellectuals.

In 1947, he flew to the United States to defend the cause of his country. Disappointed by his contacts in the Arab world – Particularly the Arab League- he quickly realized that he has to rely primarily on his own forces and on the Western anti-colonial movements.

Upon his return from exile, he begins to travel across Tunisia to regain control of the Neo-Destour, led in his absence by his lieutenant and future rival, Salah Ben Youssef.

After the failure of a governmental experiment with a Destourian participation in 1951, Bourguiba concludes that the road to independence still has a long way to go.

In January 1952, he is arrested for calling out his compatriots to multiply the actions of resistance. Luckily, on July 31, 1954, Pierre Mendes France lands in Tunis, confronts the Bey in Carthage, and tells him that Paris is not opposed to the emancipation of the Tunisian people.

On June 1st, 1955, Habib Bourguiba makes a triumphant return to Tunis, right after signing the Franco-Tunisian conventions, thus recognizing the internal autonomy of the country. His manoeuvring skills and his determination to become the undisputed leader of the Neo-Destour, pushed him to exclude from the party and exile his influential rival Salah Ben Youssef, who refuses internal autonomy.

The Proclamation of Independence on March 20, 1956 seem to have been precipitated by Bourguiba’s determination, who’s anxious to prove he merits of his “step by step” policy, especially after the support provided by the Egyptian President Gamal Abdel Nasser to Salah Ben Youssef.

On March 25, 1956, Tunisia witnesses its very first free elections. The outcome is the election of 98 members of a Constituent Assembly led by Habib Bourguiba. The Assembly also serves as a unicameral parliament. Jallouli Fares therefore replaces Bourguiba on April 15, 1956 to become Prime Minister.

In the first year of independence, Bourguiba inaugurates a series of legislative reforms. The flagship remains the Personal Status Code. Enacted on August 13, 1956 he grants women unparalleled rights in the Arab world. He abolishes repudiation and polygamy and demands the mutual consent of future spouses. This attack against the sources of discrimination against women makes Tunisian women privileged in the Maghreb and the Middle East.

Upon becoming the first President of the Republic on July 25, 1975 after abolishing monarchy in a climate of general jubilation, Habib Bourguiba pursues his project of building a modern state, relying on party that travels across the country. He strongly believes that free education is the key to fight against underdevelopment. 1/3 of the state budget is therefore devoted to this cause.

Although he wishes to broaden the base of his party and encourage young people to be politically responsible, he never promised democracy. According to him, political pluralism might lead to a division as well as awakening “tribal and retrograde mentalities”. He believes that his party’s control over the unions, press control and banning pluralism, are actually the only way to carry out his development project. 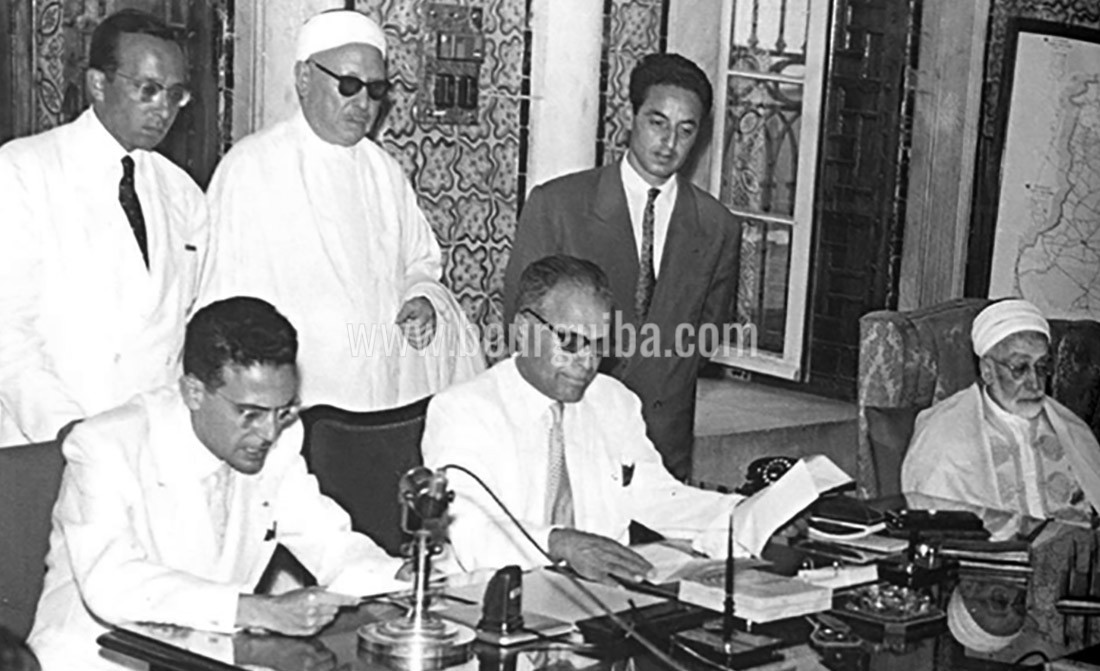 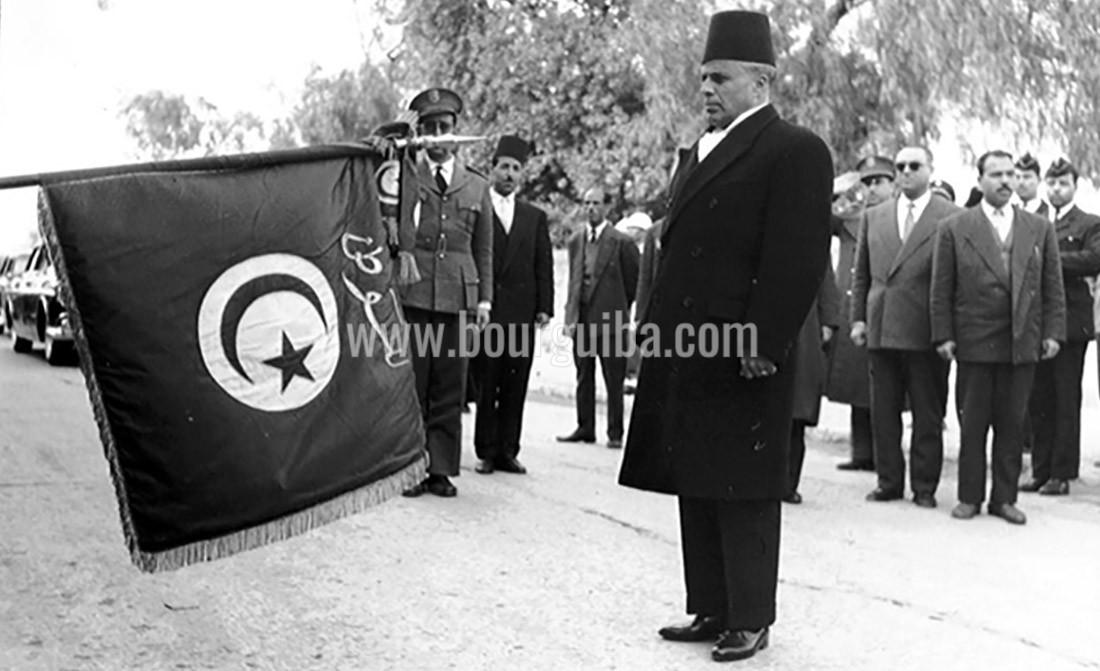 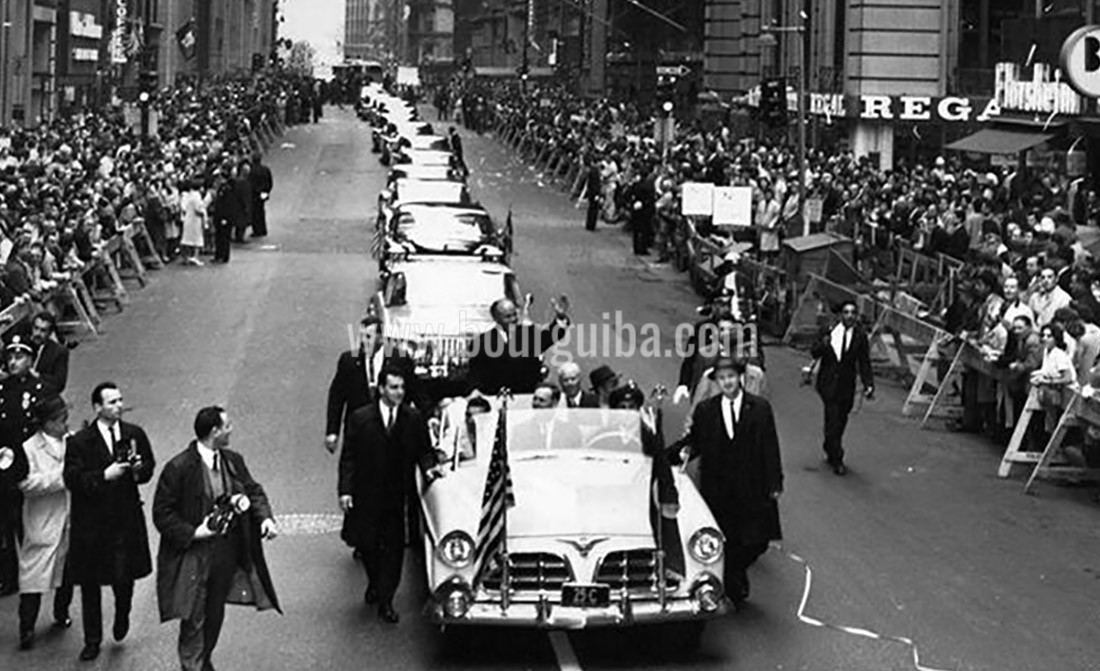 Introduction of the Personal Status Code Act into parliament, which grants Tunisian women rights which were previously ignored such as consent to marriage, abolition of polygamy, the right to vote, civil divorce …

The Constituent National Assembly proclaims the abolition of the monarchy and the institution of the Republic with Habib Bourguiba as first President who will (later) be constitutionally acclaimed on November 8, 1959.

A program of financial reforms is established, followed by the abolition of the “Habus”. Justice is unified, “Tunisified” and equipped with modern and homogenous tools.

The Tunisian state began to standardize education and reform it from top to bottom, ordered its generalization and its free for all Tunisians, without discrimination as to gender.

An extensive program of basic infrastructure construction is quickly implemented, including public hospitals, roads connecting the different areas of the country, hydraulic dams for further and efficient water resources and energy. 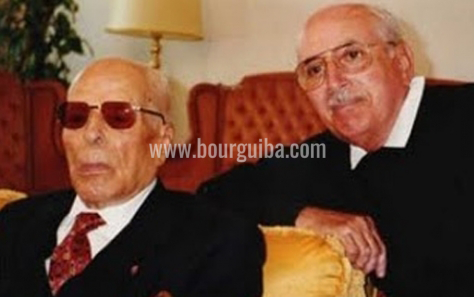 Bourguiba remained at the head of the country until November 7, 1987 until the Prime Minister and the Minister of Home Affairs remove him due to health issues.

Bourguiba spent the rest of his life under house arrest in Monastir, until his death on April 6, 2000. He is buried at the Bourguiba family Mausoleum on April 8, 2000.